My manual coffee grinder broke. Specifically, the plastic inside the upper portion of the grinder broke off and went into the burr grinding mechanism. So in addition to ground coffee, I also got ground plastic. Bummer.

Never thought this part would be the first to break and nobody sells that spare part. I needed a new grinder.

Electric grinder is much more convenient, obviously, but I had some concerns. It is noisy, takes up counter space, a bit boring, and may lead to me drinking much more coffee. I will get back to these later in the post.

I found a few models that look interesting within the price range that I was willing to part with. But I have no experience with electric grinder (except for using an espresso coffee grinder once at a friend's place), so I looked for local store options to see first hand what I was buying.

The store that sells Baratza never picked up the phone in the few days I called. Their website did not say anything, but I wonder if it closed down. Another store sells Hario. I called and they ran out the small model that I liked, but the other model is in stock and the store is not too far. I found other stores, but they carry expensive stuffs in the price range that I am not ready to part with.

I enjoyed my Hario manual grinder and I still like the brand, so I went to the store. The Hario electric grinder looked alright and the staff explained how to maintain it to keep it running well. And then, out of the corner of my eye, I saw the smeg electric grinder on the other side of the table. I inquired the staff about it in comparison with the Hario.

It's more expensive than the big Hario, but seems worth the extra cost.

I splurged for the smeg. 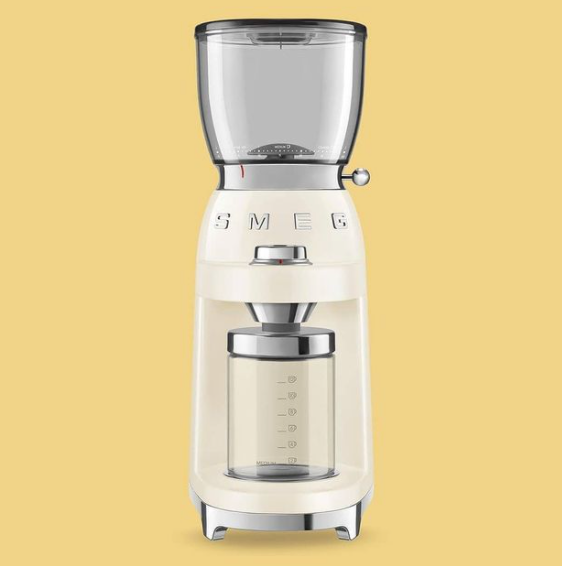 One week in, so far my concerns had been mitigated.

The noise is not so loud as I had feared and it has a pleasant pitch. (The smeg's housing is made of metal.) It looks nice, so I don't mind it taking some counter space in the corner. Obviously, pushing a button is not the same ritual as manual grinding, but the process is not so boring as I thought. Probably due smeg's good look and good user experience in operating the machine.

And to date, despite the convenience, I have not drunk more coffee than before.

I found this professional guide to immersion brewing. No, I do not do it like him at home; too cumbersome, but this YouTube video confirms some of my assumptions / techniques.