I wish I’d had the courage to live a life true to myself, not the life others expected of me.

I wish I hadn’t worked so hard.

I wish I’d had the courage to express my feelings.

I wish I had stayed in touch with my friends.

I wish I had let myself be happier.

“You can’t stop the waves from coming, but you can learn to surf.”

I guess this is along the same line as “if life gives you lemon, then make lemonade”. But surfing on the waves looks much cooler. 🏄🏽

Why we grow old

“If you could go back [in time], who would you want to meet?”

~ Toshikazu Kawaguchi, “Before the Coffee Gets Cold”

I have watched movies or read stories in the time travel genre, but the typical topic or question is 'what would you do'? However Kawaguchi's novel asks 'who'. Additionally, the time traveller knows full well beforehand that going back in time will not change the present time at all.

So if you could go back in time just for the sake of meeting a person, who would you want to meet?

The point of a company

“The whole point of a company is for regular people, each with their distinctive characteristics, to join forces and accomplish giant tasks they could not undertake alone.”

“In my career, I have enjoyed more when there was no financial motive attached. I have seen the worst in people and teams come out when they compete against each other. I have the same feeling towards promotions tied to performance. People tend to pick work that gives them the best shot at promotion rather than something they enjoy and good for the company in the long run.”

Tomorrows will run out

“Most of us live with the stubborn idea that we’ll always have tomorrow to do our most important and valuable work. We fill our days with frantic activity, bouncing from task to task, scrambling to make deadlines and chase the next promotion. ... Here’s the hard truth: sooner or later all of our tomorrows will run out, so how we choose to spend today is significant.

... It’s not about slaving over a project or living on a whim—it’s about embracing the idea that time is finite and making the unique contribution to the world that only you can make.”

“Everyone knows that debugging is twice as hard as writing a program in the first place. So if you’re as clever as you can be when you write it, how will you ever debug it?”

“We do not need to change the four Ps (Product, Price, Promotion, Place) because of digital. We need to understand that the constituent elements that make up the four Ps have changed – will continue to change – as time moves on.”

Think before you speak 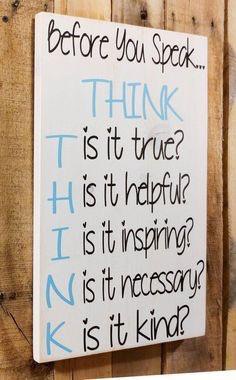